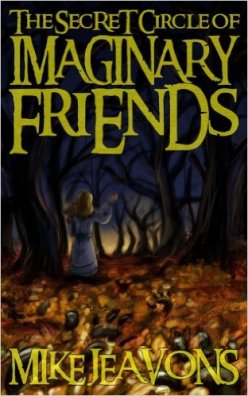 Mike Jeavons’ The Secret Circle of Imaginary Friends is an interesting children’s book, which I found reminiscent of Goosebumps, with a slight twist of Roald Dahl.

The book was suitably creepy, with great atmosphere. At the same time, it very much feels like a kids book. It gets dark, but never too dark. Some twists may be predictable, but it’s still done so well that you can’t help but enjoy the ride. The only thing that really bothered me story-wise, was the fact that then ending seemed a little sudden and rushed. I think the book could have used another dozen pages or so, for pacing’s sake.

The writing style, as well as the format and spelling was a little off putting at first, though that could be because it was written in British English. It didn’t take long to get used to though, so I’m not going to take off any points for that.

All in all, this is a fine book to give a pre-teen (or pre-teen at heart) who likes scary stories. It is genuinely creepy, the ending is fun, and it’s fully appropriate for children, without too much blood or realistic violence. If this sounds interesting to you, I highly recommend you check it out.