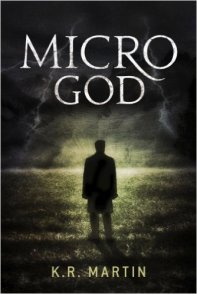 is the debut novel of K.R. Martin. Honestly, calling it a novel is actually kind of misleading. It’s more of a short story or novella. It follows a man, Richard Clarke, who has the ability to control the reality directly around himself. Essentially, at least within his few surrounding feet, he is a god. A character like that is vastly overpowered, and it poses a challenge to write a character like that, at least if it went the typical superhero route. Thankfully it does not.

The story begins with Clarke finding himself disillusioned with humanity and life itself. It is a story of the pain and anguish immortality can bring. The horror of outliving everyone you’ve ever loved. Where he goes from there is something I won’t ruin for you, as I do not want to give anything away, but it isn’t exactly what you expect.

This story has a surprisingly original premise, with shades of Hancock and Lucifer. It asks what it would be like to be a god, and really explores the concept well, giving the reader a feeling of what it would be like to be an immortal with (nearly) limitless power. The execution is fantastic, for the most part (there are a few gang members who act and talk in a cliché manner that clashes with the otherworldly tone somewhat, and took me out of the story). There’s a romance element that can be a bit eye-rolling at times, but then again, most romance usually is. The writing was impressive for a first time author, and although there are a few minor mistakes, like a missing comma here and there (I’ve seen worse violations in traditionally published books), it doesn’t take away from the story. I’d be very interested in seeing more from this author at some point down the line. The book is currently only available in digital format, which given its size is not surprising. I would say it certainly worth picking up, especially considering it’s less than a dollar.

If you’ve read the story or have a suggestion of another book you’d want me to review, please mention it in the comments below.